This past decade, I’ve experienced nearly every human emotion possible.

In 2012, I was introduced to meditation and yoga.

In 2014, I survived a stroke at the airport in Puerto Vallarta, Mexico.

In 2015, I quit my job and left New York to travel. Mexico became my home for the better part of two years.

In 2016, I learned how to let go of the bullshit that I unwittingly carried with me most of my adult life.

In 2017, I visited The Integral Heart Family of Antigua, Guatemala and became a lifelong volunteer fundraiser.

A few months later I returned home to New York.

In 2018, I started working for a company whose founder I admire on a personal level: Dale Carnegie & Associates.

In 2019, I found the most incredible woman that I fall deeper in love with every day; something I never would have done had the events of the past decade never occurred.

I realize how blessed I have been to integrate such valuable lessons after living in such extremities.

2011: Losing my father showed me what real loss was, and I developed a deeper sense of empathy towards others.

2012: Yoga and meditation gave me the tools I needed to quiet my overactive mind, truly listen to people, and focus on the present moment.

2013: Living in New York City made me realize that I am unable to thrive in an environment so disconnected from nature.

2014: Having a stroke taught me why people suffering from anxiety and depression often commit suicide and that most suicidal people don’t want to die, but rather they just want the pain to stop.

2015: Traveling alone in foreign countries taught me how to move forward in the face of fear. I also now understand why people who travel never view the world the same way ever again.

2016: Learning to surf showed me that everything in life, good or bad, comes in waves.

Managing a conscious community and holistic healing retreat center showed me that the bravest men and women are the ones who consistently face their fears, talk about their problems, admit their own shortcomings, and work through them with other people who are walking their own path of self-actualization.

The greatest takeaway of all was gaining a deep understanding that each and every one of us suffers, most of us in silence, in the catacombs of our own troubled minds.

This, my 33rd year on that planet, was where I finally began to understand the true meaning of life as taught by the sages of the earth for thousands of years: Suffering and the cessation of suffering.

2017: The people I have come to trust and respect most on this earth, the co-founders of the Integral Heart Family of Antigua, Guatemala, showed me that the best way to become truly wealthy was to give of myself.

Returning home to Long Island showed me that the ultimate test of enlightenment is to go home after years of traveling and spend time with my family. (Thanks Ram Das 4/6/31 – 12/22/19)

2018: I experienced karma first-hand after taking a job with a company whose founder, Dale Carnegie, wrote a book that helped me dig myself out of the deepest depression of my life.

2019: I met Erin, the love of my life. We never would have met had I not experienced all the pain, suffering, and lessons that this life set out to teach me this past decade.

2020: I feel like my life is just beginning; and as one door opens, another must be shut.

Being back in New York these past two years, I have left my vagabond ways behind and assimilated myself back into “the real world”, whatever the fuck that means. While my body is clearly here, my mind is always wandering, my heart is soaring like never before, and my spirit is leading me down a new path.

For now, I bid farewell to Following Freebird, the place I came to heal myself by openly sharing some of my most private thoughts these past five years. I am grateful to all of you, from my family and friends who have been following my journey, to the random strangers that stumbled upon my blog while Googling “Peyote Ceremony In Tulum.”

I have the utmost gratitude for those who have reached out to me when my mind would retreat to dark places; most of whom never realize how the smallest spark of hope can keep someone’s fire from going out forever.

As this door closes, another has been beckoning to be opened. I have been working on a novel, one I am hoping to finish in 2020. It has been inspired by those I’ve met in my travels and the life I have been so very blessed to live.

Back in 2015, somewhere along the backpacking trail between Puerto Vallarta and Puerto Escondido, I realized that I was traveling not in search of a destination, but rather a feeling. I’d catch glimpses of it when I would get lost in the beauty of the artwork and architecture of an old colonial city, or when I connected with people from the other side of the world and found out that I had more in common with them than most people from my hometown.

These experiences were what became the lifeblood of Following Freebird; to go where I felt the tugging on the strings tethered to my soul. They took me tens of thousands of miles to three continents, only to come back to the place where it all began.

Like Santiago, the young Andalusian shepherd in Paulo Coelho’s novel The Alchemist, determined to fulfill his Personal Legend, I too realized that wherever my heart was, there I would find my treasure.

The treasure that I traveled the world searching for was found in Erin’s love.

You could imagine my surprise when I found out that she got the below tattoo of a bird’s feather just four months before we met. Surely this was just a coincidence. 😉

After years of flying from one place to another, I have found my nest.

And now for the first time in my life, I feel home. 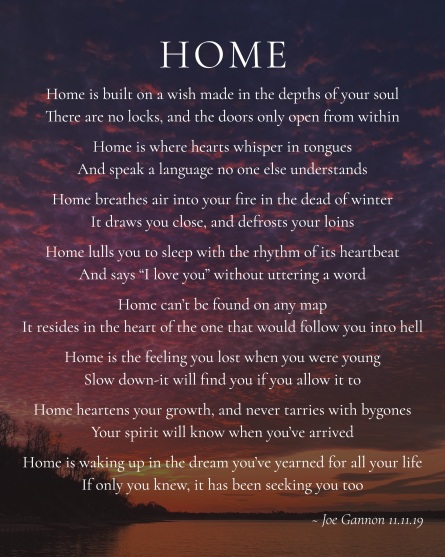